On Thursday, 2 February, at 5 pm, a galactic event will take place in lecture hall O1 at the University of Paderborn: In his lecture, Dr. Hubert Zitt from the University of Kaiserslautern will compare the visions of "Star Trek" with the current state of science and technology in a serious and at the same time humorous way. The lecture will be in German. Everyone is welcome, the entry is free. Since places are limited, registration is required: Event registration.

When Captain Kirk of the Starship Enterprise flipped open his communicator in the late 1960s, no one would have thought that 30 years later this device would inspire the developers of mobile phones. What were still visions of science fiction authors in the late 20th century have in part long since become reality today.

From the beginning, Star Trek showed technical visions that were pure science fiction at the time of production. Much of it has already become reality: For example, today we use tablets with touch screens, talk to computers and "universal translators" are getting better every year. Artificial intelligence plays a major role in this.

How realistic is it that there will be an android like Mr. Data from Star Trek in the near future? The lecture is an entertaining mixture of film clips and information about the state of science and technology in the field of artificial intelligence.

The event is part of the series "Star Trek Lecture" and will be organised at Paderborn University as part of the Physics Colloquium (Prof. Dr. Thomas Zentgraf) in cooperation with the Collaborative Research Centre TRR 142. 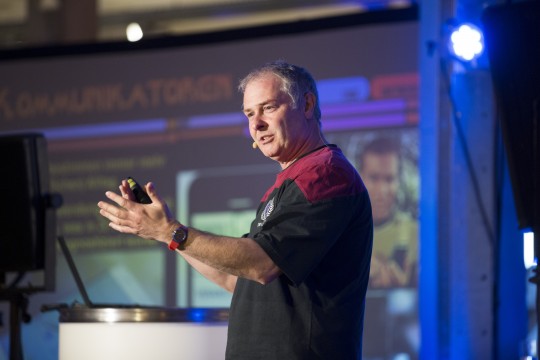 Photo (Andreas Tamme): Dr. Hubert Zitt giving a lecture at the Hamburg Chamber of Industry and Commerce. Zitt is the initiator of the Star Trek lectures. His specialties are mainly physics and technology in "Star Trek" and other science fiction movies. Download (33 KB)